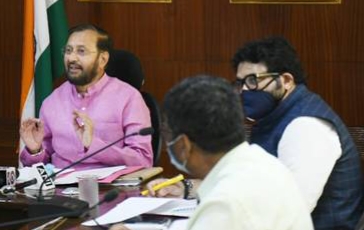 The 15th FC has increased the weightage of forests from 7% to 10% while allocating Central tax to be shared with States.

The State Forest Ministers’ Conference, held here on Monday under the chairmanship of union environment minister Prakash Javadekar, hailed the 15th FC decision to enhance the weightage for forest covers.

Minister of State in the environment ministry, Babul Supriyo, other officials in the ministry, chief ministers of the States of Arunachal Pradesh and Goa, Deputy chief ministers and 24 forest ministers from various States participated in the four-hour long meeting held via video conferencing.

Javadekar said that, “We have taken many initiatives to bring out transformational changes in our policies and programmes and implement several schemes which includes massive tree plantation, promoting urban forestry through Nagar Van Scheme, Landscape based catchment treatment of 13 major rivers, LiDAR based survey of degraded forest areas for soil moisture conservation projects and launch of National Transit Portal to facilitate smooth movement of Forest produce.”

These efforts are critical to meet our national and international goals under National Forest Policy, Nationally Determined Commitments and restoration of degraded forest land, said Javadekar.

Prime minister Narendra Modi in his independence day speech had announced the launch of Project Lion and Project Dolphin. The union environment minister said that the government will launch a holistic Project Dolphin in a fortnight, for the conservation and protection of the Dolphins in the rivers and in oceans of the country.

The union minister also stated that the government is working towards the Project Lion, that will involve conservation of the Asiatic Lion and its landscape in a holistic manner.

School Nursery scheme which aims at involving school students from the young age in nursery and plantation operations was also elaborated and discussed during the course of the four-hour long meeting. The objective of the scheme is to inculcate the spirit of forest and environment in the mind of young students. Scheme guidelines will be shared with the States shortly.

Another important issue highlighted during the meeting by Prakash Javadekar was the study given to ICFRE for river rejuvenation of 13 major rivers which will promote forestry along river, increase ground water recharge and reduce erosion. Similarly, LiDAR technology, an airborne remote sensing method which will assist in identification of the degraded land for construction of soil and water conservation structures and launch of a nationwide National Transit Portalto promote smooth inter-state movement of forest produce,whose pilot was launched recently was also an agenda item of the meeting.

During the meeting the States gave their status of preparedness for implementation of various programmes initiated by ministry and also conveyed their willingness to associate with all other initiatives of Government of India to promote green cover. States showed enthusiasm and expressed cooperation with MoEF&CC in this endeavour.