Prateek Mohanty, who is now DIG police CISF at Rourkela, and Yatindra Koyal, DIG of police NCR, Talcher, have been elevated to the rank of IG. 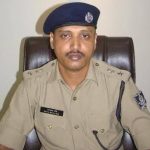 The Bhubaneswar Deputy Commissioner of Police(DCP), Satyabrata Bhoi , and Ganjam SP Ashish Kumar Singh of 2004 batch IPS officers have been been promoted to the DIG rank. Two other Odisha cadre IPS officer of the same batch –Dr. Deepak Kumar and Nitinjeet Singh– who are on Central deputation  have also been promoted to the rank of DIG.  While Deepak Kumar is SP, National Investigating Agency (NIA), Nitinjeet is the deputy secretary in the cabinet secretariat, New Delhi. The promotion would be with effect from January 1, 2018.