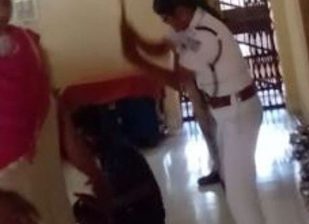 Following a video went viral showing the lady cop mercilessly beating and kicking a person in the custody, the DGP ordered a probe in the matter. Acting on the report of the Keonjhar SDPO, the DGP has placed the lady cop under suspension.

The DGP office here has informed the information through a tweet on Saturday.

According to report, Sandhyarani brought one Raju Mohanta to police station in connection with a family and dispute in the month of March. The incident occurred in March and the video appeared recently.

Tanking cognizance of media report, the Odisha Human Rights Commission has sought a report from the police on this matter and ordered for payment compensation Rs 10,000 to the victim. The OHRC has directed that the compensation money be recovered from the salary of accused IIC.