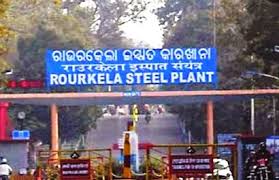 Rourkela: Rourkela Steel Plant (RSP) has created a new record in single day Crude Steel production. The plant produced 13, 336 tonnes of Crude Steel from SMS-I and SMS-II on 28th October, 2020. The earlier record for single day Crude Steel production was of 13,147 tonnes which was achieved on 3rd January 2019. The remarkable performance was largely contributed by the SMS-II department which notched up the highest ever 11871 Tonnes of Crude Steel on the said day. SMS-II also improved its earlier record of highest number of heat tapped in a single day by making a total of 76 blows on the above day. Notably, on 3rd January, 2019, SMS-II had clocked the highest number of heats tapped in a single day by tapping 75 heats.

The CEO along with the Senior Officers interacted with a representative group of SMS-II led by S Manjhi, CGM (SMS-II). The programme was organised in strict adherence to the COVID guidelines.

Commending the unflinching efforts of the collective, Chattaraj said that the laudable success demonstrates the team spirit and ‘Will to Win’ of RSP Collective. Dash urged the employees to strive further and make all out efforts to meet the set targets. The collective on their part assured the senior officers that they will leave no stone unturned to live up to their expectations.

It is noteworthy that RSP has been making rapid strides and exhibiting excellent performance on several fronts. The Captive Power Plant -3 (CPP-3) of the Steel Plant has set two fresh records in single-day power generation on consecutive days. The Steel Plant had registered a record by producing 46.70 Mega Watts of Electrical Power on 26th October, 2020. The record was broken in a mere 24-hours. Blazing a trail of success, on the very next day that is on 27th October, the Unit broke this record to create another new one by generating 47.73 Mega Watts of power on a single-day.