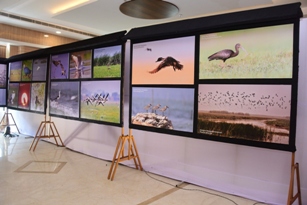 Describing the destination Chika as “a pilgrimage for over a million winged visitors of varied species, which undertake flights to the mighty but calm Chilika Lake – Asia’s largest brackish water lake,” Patnaik applauded the efforts of Odisha Tourism and Ecotour Odisha for having organised the event “which promises to add another feather in Odisha’s hat – a soaring birding hub”.

Offering a gist of the focused conservation campaign by the government, chief secretary Suresh Chandra Mohapatra said, “Chilika’s Mangalajodi is a pioneering work in community-led conservation. It is an unparalleled birding destination. From protective actions like removing encroachments to the massive census exercise conducted a few days back, and promotional campaigns such as the Chilika Bird Festival – we jointly aspire to make Odisha – Chilika along with other niche destinations such as Satkosia, Bhitarkanika and Hirakud – the most sought after birding hub of Asia-Pacific region. I take great pride in conveying that this year’s census has revealed a total count of 11.42 lakh birds across over 190 species. I also convey our sincere gratitude to the census teams for the phenomenal work.” On the government’s roadmap to expand ecotourism, Mohapatra informed of the plan to expand Ecotour Odisha’s successful community-managed hospitality to over 100 camps in the coming years.

OTDC chairperson Shreemayee Mishra applauded Odisha Tourism for its stellar handling of the tourism ecosystem during the COVID-19 pandemic through protocol-compliant festivals and unmatched promotion and publicity. “The transformation of Puri and Lingaraj Temple precincts under the leadership of our Chief Minister have set the direction for all of us – to unitedly make Odisha’s tourism and hospitality sector the most sought after.”

PCCF and Chief Wildlife Warden, Odisha, Dr. HS Upadhyay, said, “As we speak of safety, Chilika is also one of the safest havens for the endangered Irrawaddy Dolphins, which are flourishing here.” Dr. Upadhyay offered a scientific insight into the natural processes which preserve the salinity of the lagoon, a central factor for the flourishing biodiversity.“More than 600 community members, mainly tribals are engaged in this vast social enterprise”, he added to emphasise the community orientation of the conservation efforts, a factor which balances ecological and social sustainability.

Additional chief secretary, forest & environment, Dr. Mona Sharma offered a perspective on the strategic commonalities between eco-conservation and tourism and reminisced on the history of the Chilika Bird Festival. She beckoned the guest participants to play the vital role of ecotourism ambassadors of Odisha.

In a concurrent development, the tourism and forest & environment departments of Odisha renewed their understanding, first signed in March 2017. The objective is to tap and promote the state’s ecotourism potential – thus creating alternative employment opportunities for local community. The key aspects of the understanding are:

Articulating a timely analogy, tourism minister Jyoti Prakash Panigrahi said, “Who says foreign tourist arrivals is curtailed? Not for these winged guests that Odisha’s pride, Chilika Lake, hosts every year. Birds metaphorically represent a quest for freedom from the immobility imposed by the pandemic – the world over.”

In a note of assurance of safety, Panigrahi said, “Our guests’ wellbeing is paramount to us. Localised and global scares – be it the avian flu or the Covid-19 pandemic, have changed the way we interact. But the show must go on. Odisha’s sensitization and capacity building programme in response to the pandemic has been one of the most in-depth and inclusive. We are uncompromising on following SOPs, and assure you of your safety.”

Complementing the joint vision, forest & environment minister Bikram Keshari Arukha said, “It will not be an exaggeration to say that the soul of Odisha tourism resides in Chilika. Our conservation efforts will continue to be synergised with our tourism development efforts.”

Former PCCF, Odisha Dr. Ajit Pattnaik, IFS (Retd.) offered a historical overview of the conservation of Chilika Lake as Asia’s largest wintering ground for birds.Dr.Pattnaik analogised the adaptive restoration process as a “surgery on an ecosystem” – referring to efforts to counter siltation and illegal shrimp culture, complemented by periodic monitoring and consultations. “Desalination was an existential threat, since it is an irreversible process. The reducing number of marine and brackish water species raised an alarm in late 80s, which resulted in concerted global efforts. On the local front, we kept conducting scientific as well as community consultations.”, informed Dr. Patnaik, who also likened the move to open an alternate inlet mouth to the Bay of Bengal as a “bypass surgery on an ecosystem”.

Dr. S. Balachandran, senior scientist and Dy. Director of Bombay Natural History Society (BNHS), gave a detailed presentation on phenomena associated with bird migration and its study.Dr. Balachandran also touched upon tourism economics – by informing that over 7 lakh tourists visit Chilika Lake each year, generatingtourism activity worth INR 200 crore a year.“The large size of the lagoon offers a scope for several, the macrophyte density and the hydrology are key factors for Chilika’s bird diversity. This is complemented by our uncompromising monitoring of threats including physical sample collection and satellite studies”, he said. Dr. Balachandran also took the audience through a presentation on the diverse species of birds sighted in the lagoon.

The third presenter, geospatial scientist and avid birder Mr. Arpit Deomurari offered a quirky insight into the global historyof birding.Mr. Murari detailed on his experiments with GIS technology and its emergent role in conservation.

Articulating the strategic agenda of Odisha Tourism, Principal Secretary Tourism, Shri. Vishal Dev, IAS said, “The highly successful collaborative teamwork of the Tourism and Forest & Environment Departments today entersits second phase, in which we jointly strive to double the capacity of Ecotour Odisha accommodations to 600, while enhancing the tourist experience and aesthetics through infrastructure and skill upgrade. Our commitment to responsible tourism continues unattenuated into the space of luxury and leisure, with Eco Retreat Odisha – Eastern India’s foremost glamping festival. In just its second edition, the Eco Retreat has expanded to five unique locations – Bhitarkanika, Daringbadi, Hirakud, Konark and Satkosia – of which three locations are prime birding hotspots. I hope some, if not many of you, will be able to enjoy 2021’s first retreat at Eco Retreat Odisha.”

Over the next two days, participants will undertake tours to Mangalajodi– Nalabana and ChandakaDampara Sanctuary and Satkosia Tiger Reserve (Badmul) as add-on itineraries.