Odisha chief secretary for net connection at GP level by May2021 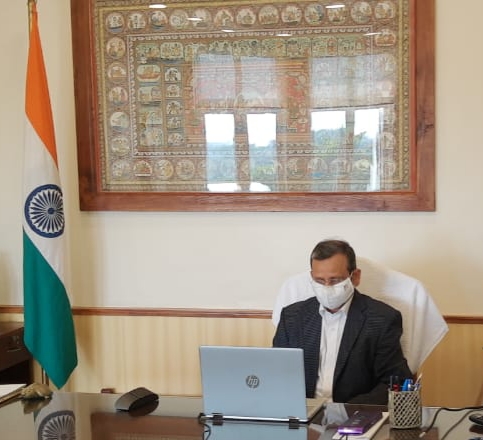 Bhubaneswar: Odisha chief secretary Suresh Chandra Mohapatra Wednesday set the target to complete the net connectivity up to Gram Panchyat level by May 2021.

While reviewing the progress of Bharat Net project in the State the chief secretary has put high speed internet connectivity to GPs on the priority active agenda of the State government.

Mohapatra said, “In today’s context, internet connectivity is a basic requirement for maintaining high growth rate in rural sector. It will help the process of people’s empowerment and capacity building besides adding to quality education and health services. People can avail various services provided through online mode. GPs can also be connected through video conferencing”.

Mohapatra set the time line for completion of the different phases of work at the ground level. Target was set to complete of the physical work by end of May, 2021.

It was also decided that all government offices including the schools, medicals, banks and common service centers could access the broad band connectivity. The telemedicine centers and agriculture kiosks would be connected for facilitating health care, e-learning and profitable agri-commerce.

Outlining the present status and issues for discussion, Secretary Electronics and Telecommunication (E & IT) Manoj Kumar Mishra said, “With completion of the work, OCAC would be the chief bandwidth provider in remote areas of the State”. The ground level activities have been put on fast track. So far 3945 blocks and GPs have been provided the connectivity under Phase-I. The road map for connecting balance blocks and GPs have already been rolled out under Phase-II. The Phase-II work is being executed under the joint collaboration of OCAC, OPTCL and Tarasoft”. He added, “This infrastructure will bring all the GPs within the scope of SWAN network. Its dark fibers can also be hired to the telecom and internet service providers on commercial basis”.

Available data show, the project is being implemented in two phases. In the first phase 3810 GPs and 181 blocks have been taken up. As of now, 3770 GPs and 175 blocks have been connected. The work for connecting other 2954 GPs and 133 blocks of 12 districts has been taken up under Phase-II. Under this phase, around 20,000 kms of areal optical fiber is to be drawn; against which, drawing of 13,400 kms of cable has been completed. Out of the total 3087 connection points ‘end to end testing’ have successfully been conducted in 1630 points.