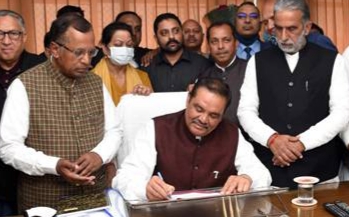 After taking charge, Vijay Sampla addressed the media and said that he  willwork incessantly to safeguard the interests and the rights of the Schedule Caste community. Shri Sampla added that the Commission will  work not only to ensure justice to the SCs but will also remain pro-active to prevent any form of injustice to the Community. Giving further details, he said that the Commission will  engage   to participate and advise on the planning process of socio-economic development of the Scheduled Castes  and to prevent atrocities against them.

Vijay Samplahasbeen the union minister of state and state president of the BJP from Punjab.He was as chairman, Punjab Dalit Vikas Parishad; state coordinator, AnusuchitJati Aarakshan Bachao Manch and also Chairman, Bharat Gaurav. He served as Chairman , Khadi and Village Indusries Board, Punjab from 2009-12 and subsequently his name was recommended for Rashtrapati Award.

He won the 2014 General Election from “Hoshiarpur” Constituency of Lok Sabha and was the Union Minister of State for Social Justice & Empowerment from 09th November, 2014 to 24th May 2019. Shri sampla was actively involved in the upliftment and welfare of deprived classes of the society, especially for the Scheduled Castes. He assumed charge today after being appointed by the President of India as Chairman, National Commission for Scheduled Castes, Government of India.