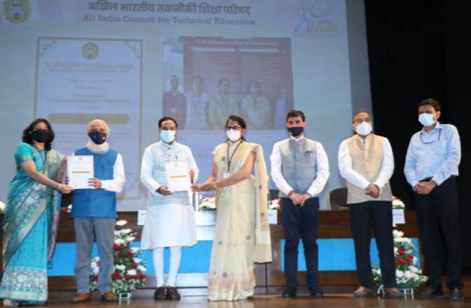 Speaking on the occasion Pokhriyal congratulated all the 456 teams who participated in the contest. The Minister said that India is a country where ‘Nari Tu Narayani’ has been an integral part of our ethos and culture. In line with the vision of our Prime Minister, the govt has launched several welfare schemes for the overall development of girls and women in various fields, including Sukanya Samriddhi Yojana, Beti Bachao – Beti Padhao Yojana, etc, he added. Shri Pokhriyal also informed that Government launched Udaan scheme which aims to enable girls of weaker socio-economic status at school level to gain access to higher education. We also started Pragati Yojana to give young women opportunity to further their technical education, he added. Shri Pokhriyal highlighted that the new National Educational Policy has greatly emphasised on gender equality and students should participate in such initiatives to promote women empowerment.

He welcomed the initiative of AICTE for instituting the Lilawati Awards and stressed that such innovative steps shall be great motivation for girls to join higher education. This initiative will pave a path towards equality in education and innovation, for women

AICTE chairman Professor Anil Sahasrabudhe said, “I thank Honorable minister Shri Ramesh Pokhriyal ‘Nishank’ for attending the event. AICTE is so happy to present this year’s Lilawati award aimed at empowering womanhood in the nation. Moreover, I congratulate all the teams who submitted the entries. India is a country known for respecting and celebrating the glory of womanhood, and with initiatives like these, AICTE is also contributing its bit to empower the women in our country,” said Sahasrabudhe.

Based on the theme ‘Women Empowerment’, AICTE finalized the winners from a total of 456 entries who competed across 6 sub themes, which include, Women’s Health, Self-Defense, Sanitation and Hygiene, Literacy, Women Entrepreneurship, and Legal Awareness. After analyzing the initial entries, the top 10 entries under each sub-theme were invited for presentation before the two committees headed by Prof Sushma Yadava, Vice-Chancellor, B.P.S. Mahila Vishwavidyalaya Khanpur Kalan, Haryana and Dr. Vinita S. Sahay, Director, IIM Bodh Gaya.

Bharatiya Vidyapeeth, who won the award under the digital literacy subtheme suggested that internet revolution that has happened in India post-2014 has played a crucial role in empowering women in the nation. “Post-2014, the internet revolution happened in India, and it has helped women in the country to grow, as information is accessible at their fingertips. However, even now, there are several women in the country who do not have sufficient digital literacy, and we should bring them too to the forefront of the society,” said Bharatiya Vidyapeeth.