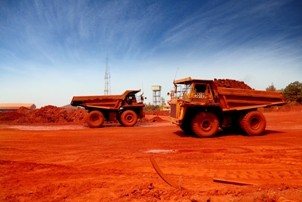 New Delhi: Indian Industrial Value Chain Collective (IIVCC), a group representing organizations involved in the industrial production and consumption supply chain activities across India Tuesday released data on the loss resulting from import activities of bauxite, a raw material required to manufacture aluminum. For the first quarter of 2021, this totals to a staggering USD 51.97 million (Rs 390 crore), which otherwise should have belonged to the people of India, with a significant share going to the participants in the value chain of extraction, transportation, processing and supply of bauxite and its end output.

Commenting on the situation, IIVCC member Abhay Raj Mishr said, “Natural wealth in the form of minerals and natural resources of any region should ideally be utilized for the socio-economic development of its native populace. However, despite India having the fifth largest bauxite deposit in the world, with over 50% of it located in Odisha alone, aluminium industries continue to rely on imported bauxite. This has caused a forex loss of $ 571 million (Rs 4,400 crores) in the last 6 years alone”

“With bauxite reserves of more than3.8 billion tonnes, it is baffling that India has to meet its bauxite requirements from imports. For every single mine auctioned, there is potential to garner Rs.5,000 crores for the exchequer and create 10,000 livelihood opportunities. The positive ripple effect that this could have on the socio-economy of the region is significant.” he added.

India, the nation with the fifth largest deposit of bauxite in the world,continues to witness large-scale forex loss due to its reliance on bauxite imports. With there being no substitute for bauxite, as it is the only ore used for aluminium production, the availability of bauxite is critical to the growth and development of the Indian aluminum industry.Testimony to the fact, bauxite import has increased by 300% in past 6 years as per data published in Import-Export Databank, ministry of commerce.

The state most affected due to this forex loss is Odisha which has nearly 50% of the country’s bauxite reserves and 25% of its coal reserves, both of which are the primary raw materials for aluminium production. Odisha is the largest aluminium producer in India, with a production capacity of 2.7 million tonnesper annum. The state has attracted investments of over Rs. 1.4 lakh crores to make it the aluminum capital of the nation. Yet, instead of being able to leverage Odisha’s rich mineral geology, manufacturers are forced to import bauxite, compromising the viability of the aluminium industry.Further,Odisha’s population is yet to see its domestic natural deposit translate into economic development.

India should take a cue from the success stories of mineral-rich developing countries like Guinea in West Africa. Their concerted efforts to unlock their mineral power saw large-scale economic development and global dominance in the world’s supply chain. Guinea, with the opening of multiple bauxite mines, saw its production, previously languishing at 18 million tonnes in 2015, enhanced by 400% to 78 million tonnes in 2020. In a span of just 5 years Guinea changed the global landscape and is now a major worldwide supplier of bauxite, yielding rich socio-economic dividends to its citizens. The impact of bauxite mining is visible on the GDP of Guinea which was growing at merely 3.8% in 2015 but has now registered a growth rate of 5.2% in 2020 despite the global pandemic. India too is relying on Guinea and importing bauxite for its industry at present.

Per capita consumption of aluminium in India is about 2.7 kg, compared to the world average of about 11 kg and China’s 24 kg.India’s ambition to become a global manufacturing hub can increase this to 7 to 8 kg. For this, a rapid growth in bauxite production from the current 20-22 million tonnes to 72 million tonnes per year is needed to meet the growing domestic requirement.

The question as to why India is importing bauxite when it can just mine it from its abundant reserves is due to bureaucratic chokehold. It is a matter of great concern that despite aluminium’s relevance and recognition as one of the 12 champion industries, no Metallurgical Grade Bauxite Mine has been successfully auctioned in the last 6 years since the inception of MMDR Act 2015. This has resulted in planned new investment of over Rs.50,000 crores in the aluminium sector being put on hold. Further, the unviable and arbitrary method of determining the Average Sale Price (ASP) of bauxite, renders the ex-mine price of the ore inflated by 300% to 400%.

It is no secret that aluminium is a metal of strategic importance for India, and has a great multiplier effect on downstream industries and MSMEs. However, it is reliant on India’s bauxite mining capacity to a large extent. With the economic setback caused the pandemic, it is critical for India to start auction of its bauxite mines to strengthen the aluminium industry. Successful auction of bauxite mines will further attract huge investments wherein fresh investments of over Rs. 2 lakh crores are envisaged in Aluminium Sector to meet the growing demand. By properly leveraging the country’s latent natural resources, India will not only save precious foreign exchange, but also generate huge local employment opportunities and yield rich socio-economic dividends for the state.