No Rath Yatra except Puri in Odisha: Apex Court 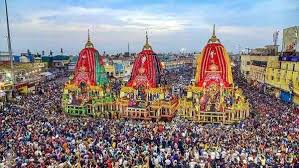 New Delhi: The Supreme Court has rejected all the petitions seeking conducting Rath Yatra at various places in Odisha.

The apex court has said Pray to God from home. The Supreme Court trusts that God will allow Yatra in 2022.

Petitions were filed in the apex court seeking directions to the State government allowing holding Rath Yatra in Kendrapada and other places of the State. The petitioners containtion was that Rath Yatra be allowed in other places like Puri.

The apex court while dismissing the petitions said that the Rath Yatra rituals be performed inside the temple premises except Puri.

In Puri, following the Supreme Court’s direction last year, Rath Yatra is being conducted with strict Covid-19 protocols. The Yatra in Puri will conducted by the temple priests and savayats in the presence of police. No devotees would allowed into the city which would be under curfew for two days.