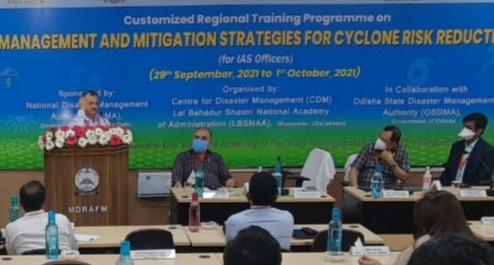 Bhubaneswar: The IAS training institute Lal Bahadur Sastri National Academy of Administration (LBSNAA) joined Odisha government’s OSDMA to impart training to the IAS probationers on disaster management. This is for the first time, the LBSNAA collaborated with an outside institute for training of India’s elite service officers.

Odisha chief secretary Suresh Chandra Mahapatra addressing the i anaugural session of the traning Wednesday on Disaster Management organised at Madhusudan Academy of Accounts at Bhubaneswar under the joint collaboration of OSDMA and Lal Bahadur Shastri National Academy of Administratio said, “This is for the first time that IAS training session is being organised in collaboration with another institution outside LBSNAA. The reckoned Professor and professional said Odisha has emerged as international bmodel state in disaster management.”

Probationers and IAS officers from different States are participated in the traning.

Chief secretary Mahapatra said “See how people in Odisha live with disaster and how their capacity has been built to save their life and properties during the cyclone and floods”.