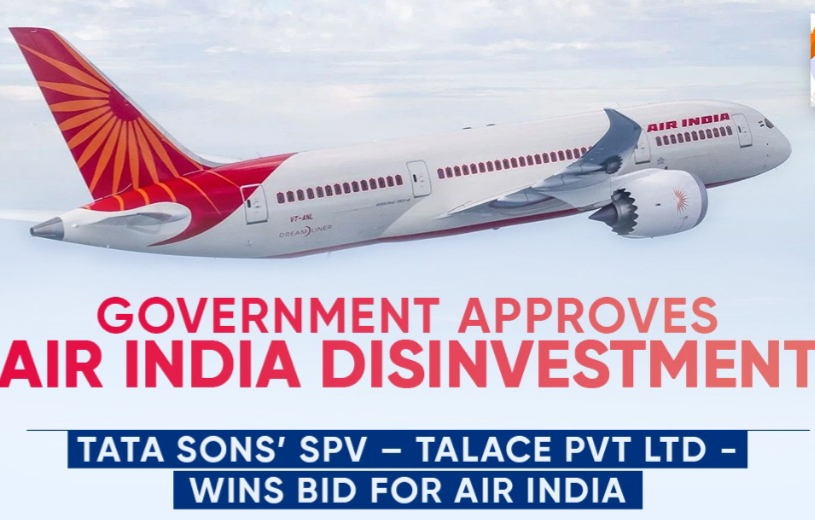 The winning bid is for Rs 18,000 crore as Enterprise Value (EV) consideration for AI (100% shares of AI along with AI’s shareholding in AIXL and AISATS).  The transaction does not include non-core assets including land and building, valued at Rs 14,718 crore, which are to be transferred to GoI’s Air India Asset Holding Limited (AIAHL).

The process for disinvestment of Air India and its subsidiaries commenced in June 2017 with the ‘in-principle’ approval of CCEA. The first round did not elicit any Expression of Interest. The process re-commenced on 27 January 2020 with issue of Preliminary Information Memorandum (PIM) and request for Expressions of Interest (EOI). The original construct as per the January 2020 PIM envisaged (i) pre-determined, fixed amount of debt to be retained in AI (with balance to be transferred to Air India Asset Holding Limited (AIAHL) and (ii) the sum of certain identified current and non-current liabilities (other than debt) to be retained in AI and AIXL would be equal to the sum of certain identified current and non-current assets of AI and AIXL (excess liabilities to be transferred to AIAHL).

The timelines had to be extended on account of the situation arising from the COVID-19 pandemic. In view of the excessive debt and other liabilities of Air India arising out of huge accumulated losses, the bidding construct was revised in October 2020 to Enterprise Value (EV) to allow prospective bidders an opportunity to resize the balance sheet and increase chances of receiving bids and competition. The EV construct allowed the bidders to bid on the total consideration for equity and debt instead of a pre-determined, fixed debt with minimum cash consideration of 15% for equity. As per both the original and revised construct, all non-core assets (land, buildings, etc.) are to be transferred to AIAHL and are therefore not a part of the transaction. It has been ensured that the interest of the employees and retired employees would be taken care of.

The transaction saw keen competition with seven EOIs being received in December, 2020. Five of the bidders, however, had to be disqualified as they could not meet the requirements set out in the PIM/EOI, even after allowing them an opportunity for clarification. The Request for Proposal (RFP) and draft Share Purchase Agreement (SPA) was issued on 30 March, 2021. Air India provided comprehensive information through the Virtual Data Room to the qualified bidders who were also provided access to inspect the assets and facilities being offered as a part of the transaction. A large number of queries from bidders were responded to. On request of bidders, the bid due date was extended to 15 September, 2021 so that they could complete their due diligence before submission of bid. The final SPA containing detailed terms and conditions and the respective responsibilities to meet the conditions precedent for closing the transaction including release of Government guarantees prior to closing was agreed upon prior to bid submission. Two sealed bids were received on the due date along with non-financial bid documents and bid security from the two qualified bidders.

In line with the approved procedure for strategic disinvestment, a reserve price was fixed after the receipt of sealed financial bids for the transaction, based on valuation using methodologies as per the established process. After the independent fixation of Reserve Price, the already received sealed financial bids were opened in the presence of the bidders, who were as follows:

Both the bids were above the reserve price of Rs 12,906 crore.

The entire disinvestment process has been carried out in a transparent manner, with due regard to confidentiality of the bidders, through multi-layered decision making involving Inter-Ministerial Group (IMG), Core Group of Secretaries on Disinvestment (CGD) and the empowered Air India Specific Alternative Mechanism (AISAM) at the apex Ministerial level. Transaction Adviser, Legal Adviser, Asset Valuer, professionals in their respective fields, have supported the entire process.

The next step will be to issue the Letter of Intent (LoI) and then sign the Share Purchase Agreement following which, the conditions precedent would need to be satisfied by the successful bidder, the company and Government. It is expected that the transaction will be completed by December 2021.