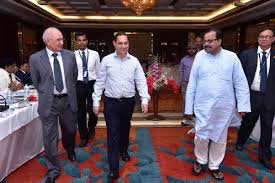 Bhubaneswar: The Odisha government Thursday urged the commercial banks operating in the state to enhance the CD ratio, disbursement of Mudra loans and banks presence in the rural areas.

The state finance minister, Sashi Bhusan Behera, while presiding over the 149th State Level Bankers’ Committee (SLBC), said that it is a matter of concern that the number of young entrepreneurs receiving Mudra loans in the state is coming down. Pointing out that the banking services are not available in rural areas, he said that 818 bank outlets have been opened by March 2017, the works of another 656 at panchyat levels are progressing.

The finance principal secretaty, Tuhin Kanta Pandey , urged the banks to focus on improving the CD ratio. He said though the CD ratio has improved from 40% in some districts  still there is need to further improve it.  He hailed the initiative of the RBI to convene the bankers meeting every month. He also said that micro credit organisation like Suryoudya and Ujjibani have started operating in the state.