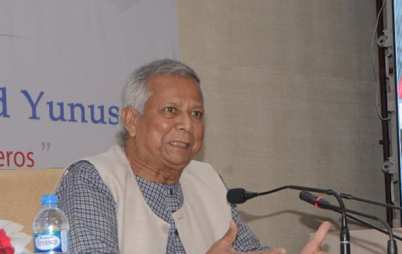 Delivering the 16th lecturer of Odisha Knowledge Hub (OKH), Yunus maintained that removing poverty needs activating the citizens. This cannot be done only through government money. It can be achieved through appropriate policy, institutions and strong willingness. Zero Poverty, Zero Unemployment and Zero Carbon Emission (A world of Three Zeros)  are not academic concepts; they are jobs and can be realized through joint action, he asserted.

The Noble laureate said that micro credit system through the models of ‘social banking’ adopted by Grameen Bank of Bangladesh has proved successful in Bangladesh. The technique has helped lakhs of families removing the mark of poverty from their face.  It has also proved its worth in empowering women of Bangladesh enormously. He emphasized that the similar banking model  has also been successfully tried in different western countries. He expressed the confidence that the same model can be replicated in India and elsewhere for removing the poverty by improving banking access to poor men. He added that every individual has the qualities of entrepreneurship and it through opening their access to credit that his/her productivity can be enhanced. He showed how extension credit to the beggars in Bangladesh through Grameen Bank has made them the entrepreneurs.

Yunus said that the Odisha government’s initiative of ‘knowledge sharing’ about good governance through the institution of OKH should be a role model for other states in the country.

The development commissioner, R. Balakrishnan, said the micro finance model initiated by  Yunus is a proven model both in Bangladesh and USA. It would be helpful in improving access of poor to the banking system.