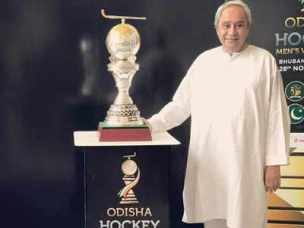 Bhubaneswar:  Odisha is going to host the Hockey Men’s World Cup again in 2023.  Chief minister Naveen Patnaik made this big announcement this evening at a special function at Kalinga Stadium. The CM said 2023 World Cup matches will be played both in Bhubaneswar and in Rourkela.

This has once again proved that Odisha has truly become the global centre of world hockey. Hockey fans will witness the finest display of hockey in the winter of 2023 both in Bhubaneswar and in Rourkela.

It may be mentioned here that the competition to host Hockey Men’s World Cup was between Malaysia, Belgium and India. After a series of bidding rounds, India won the bid to host again the Hockey Men’s World Cup. Hockey India selected Odisha as the venue and to partner with Odisha government to host the 2023   Men’s Hockey World Cup.

It’s a rare honour for any country to a host world cup; but here Odisha as a state is going host it for the second time in a row. The chief minister proposed to the Hockey Federation to host the matches both in Bhubaneswar and Rourkela.

Rourkela  Panposh hostel is the nerve centre of hockey in the country and as a tribute to the contribution of Sundergarh to Indian hockey, the CM proposed to host this prestigious event in the smart city Rourkela in Sundergarh.  This will put Rourkela and Sundergarh in the global map of Hockey, and help support the recognition and development of this area.

The chief minister laid the foundation stone for 17 astro-turf hockey stadiums (Training Centres) in Sundergarh. These will be completed in a year’s time. This kind of infrastructure is not there even in European hockey playing nations in the world.  He also laid the foundation stone for the hockey high performance centre building and launched the grassroots development programme in Sundergarh district by Hockey India.