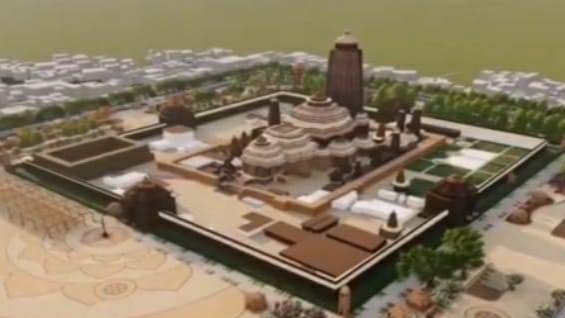 London (UK): The Jagannath Temple Trust, UK, a charitable organisation founded by eminent UK based Odias, has announced to construct a massive Jagannath temple in London.

The plans for this divine project were unveiled by the Jagannath Temple Trust, UK, a charitable organisation founded by eminent UK based Odias, recently at the 41st Annual Convention of the Odisha Society of United Kingdom (OSUK)

It has been a long-cherished dream of UK based Odias to spread Jagannath Culture in their adopted land, and to establish a dedicated Lord Jagannath temple. The UK already has temples to the deities of some of the holy Hindu ChaarDhaams. However the absence of a dedicated temple to Lord Jagannath has been acutely felt by the Odia community in the UK that has an established presence in the UK for well over half a century, with numbers rapidly expanding year-on-year. This dream of UK Odias will now be realised by The Jagannath Temple Trust, UK which aims to complete construction of a majestic Jagannath Mandir in the Greater London region by 2024. The Trust is currently finalising an appropriate site in the Greater London region for the temple.

The Founder Trustees of the Jagannath Temple Trust, UK, comprise many eminent Odias– all of whom are long standing residents in the UK, and prominent members of OSUK. The Trust has been set up with initial funding through generous donations from the Odia community in the UK. The charitable organisation revealed that the project will be a community-led affair, in which the main stakeholders will be devotees of Lord Jagannath, with the UK Odia Community playing a pre-eminent role. A Membership Drive, inviting devotees to become stakeholders and partners in this spiritual journey was also inaugurated on this occasion. London being one of the most expensive cities in the world, the Trust estimates the cost of constructing the Jagannath Mandir to be 4 million British Pounds. It aims to raise these funds entirely through generous donations from the UK Odia and Hindu community, Jagannath devotees across the world, corporate entities, philanthropic organisations and support from governmental organisations in the UK and India which was also kickstarted on this occasion.

The Trustees disclosed that their vision has been guided and endorsed by several eminent religious saints and scholars immersed in the service of Lord Jagannath, and have been assured of all support by the Maharaja of Puri, Gajapati Maharaja Dibya Singha Deb and Union Ministers Dharmendra Pradhan and Pratap Chandra Sarangi. They have also received tremendous encouragement from several Jagannath Temple organisations across the world.