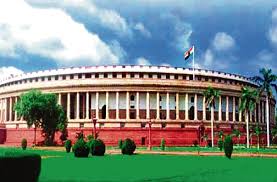 New Delhi: The Lok Sabha Tuesday passed the three controversial labour reform Bills. The Bills will be converted into acts after being passed in the Rajya Sabha.

Minister of state (I/C) for labour & employment, Santosh Gangwar, while responding to the debate in the Lok Sabha, has said that the three Bills will prove to be a game changer in the labour welfare reforms covering more than 50 crores organized and unorganized workers in the country.

The 3 bills which were passed in the Lok Sabha today are (i) Industrial Relations Code, 2020 (ii) Code on Occupational Safety, Health & Working Conditions Code, 2020 & (iii) Social Security Code, 2020.  These bills are part of Government’s earnest desire to bring much needed labour welfare reforms in the country which has not been done for the last 73 years.  In the last 6 years, many multi-stakeholders consultations were held with all stakeholders i.e. Trade unions, Employers, State Governments and experts of labour sector.  This also includes holding 9 tripartite consultations, four Sub Committee meetings and 10 Regional Conferences, 10 inter-ministerial consultations and views of citizens.

Gangwar said that the government is ceased with the problems faced by workers and for the last 6 years.

“My ministry has launched many welfare measures such as increasing the maternity leave for our sisters from 12 weeks to 26 weeks, women were allowed to work in mines under Pradhan Mantri Protsahan Rozgar Yojana.  Formal employment was increased portability in EPFO and welfare schemes and and expansion of ESIC facilities to our fellow citizens. “

The minister, while replying to the issues raised by the members of Lok Sabha, said that the Bills takes into account the holistic development of the country by keeping the labour interest uppermost in the mind. He said these are the people who have suffered mostly by having multiple laws on labour which involved procedural complexities thereby hindering implementation of various welfare and safeguard provisions.  He further said that 29 labour laws are being subsumed in the simplified, easy to understand transparent 4 labour codes. Out of the 4 labour codes, Code on Wages has already been passed by Parliament and have become the law of the land.  All the labour laws (29 in number) being amalgamated into 4 labour codes are :

Elaborating the benefits of the new labour codes,  Shri Gangwar informed the House that the entire work force of the country will now be entitled for obtaining benefits under different codes.  Minister mentioned the salient features of the 3 Codes which were passed by the Lok Sabha,

Extending the reach of ESIC: Effort have been made to provide right to health security under ESIC to maximum possible workers:-

(a)  The facility of ESIC would now be provided in all 740 districts. At present, this facility is being given in 566 districts only.

(b) Establishments working in hazardous sectors would mandatorily be linked with ESIC, even if there is only one worker working in it.

(d) Option to link workers working in Plantations is being given to Plantation owners.

(e) Option for becoming member of ESIC is also being given to establishments with less than 10 workers.

Extending the reach of EPFO :

(b) Option to join EPFO is also being given to establishments having less than 20 workers.

(c) Schemes would be formulated for bringing workers coming under the category of ‘Self-employed’ or falling under any other category under the aegis of EPFO.

Efforts made by the Government for quickly resolving disputes of the workers :

(a) Provision for two members instead of one member in the Industrial Tribunal. In case of absence of one member, work can still be undertaken smoothly.

(b) Provision for taking the matter straight to the Tribunal in case the dispute is not resolved at conciliation stage. At present, the case is refered to the Tribunal by the appropriate Government.

(c) Implementation of award in 30 days

(e) With the objective of better and effective participation of Trade Unions, a provision for “Negotiating Union” and “Negotiating Council” has been made for undertaking negotiation on any dispute. With conferring of this recognition, resolving disputes through dialogue would be facilitated and workers would be better able to get their rights.

(f) Arrangement for going to the Tribunal has been made for resolving disputes arising between Trade Unions. Less time would be required for resolving their disputes.

(h) Provision for RE-Skilling fund has been made in the law for the first time. Its aim would be to re-skill those workers who have been fired from their jobs, so that they are easily able to get employment again. For this, workers would be given 15 days salary within a period of 45 days.

Shri Gangwar said we have extended the definition of migrant workers, so that migrant workers moving from one state to another on their own and migrant workers who have been appointed by the employer from a different state can also be brought under the ambit of OSH code. At present, only migrant workers who had been brought through the contractor were benefiting from these provisions. The Minister also elaborated following benefits of the Labour Codes :

Shri Gangwar also stressed that the changes and reforms in the labour laws have been conceptualized keeping in mind the changing scenario over the years and also making them futuristic so that country marches on faster growth trajectory. With these the peaceful and harmonious industrial relations will be promoted in the country which in turn will lead to growth of industry, employment, income, balanced regional development and will bring more disposal income in the hands of workers. Shri Gangwar further pointed out  these path breaking reforms in the country will help our country to attract the Foreign Direct Investment and also domestic investment from the entrepreneurs and will end ‘inspector raj’ in the country and will bring total transparency in the system. “India will become favourite investment destination in the world” he added.