THE YEAR OF LIVING ABSURDLY: THE LOST YEAR 2020 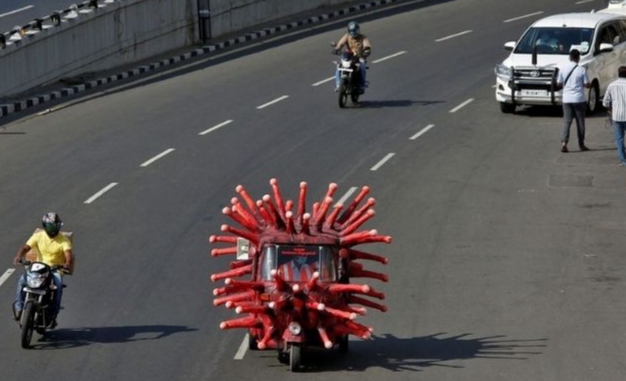 The Good, The Bad and The Ridiculous In The Virus Year

No year in human history has been so completely and comprehensively identified by a single event as that of 2020. We had the World Wars, the Spanish Influenza and the Great Depression to engulf human civilisation in their own ways. The World Wars, particularly the Second, affected large parts of our world in its effect but there were many regions which did not see actual action. The world was not so much connected during the Spanish flu which left quite a few areas unaffected. The Great Depression affected all countries’ economy but the majority of humankind hardly felt any difference as they were in a permanent state of misery anyway. So that makes 2020, the Year of the Virus, the most deeply felt and lived times where practically every square metre of earth has been experiencing the Virus and its effect on each human being living on it,  living a life full of absurdity in various ways. It needs very little illustration to explain its nature as a truly lost year in civilisational calendar. Amidst global devastations and shattered lives in the wake of the virus, myriad perspectives can be given to the Year that’s passing by and I propose to add one of my own in picking out the good, the bad and the ridiculous about the year.

The Good, the Bad and the Ridiculous is an interesting concept which I came across from a book of the same title by Khushwant Singh which offers some terrific, very personal and visceral insights into some of the most prolific people (writers, government officials, presidents and prime ministers) that shaped India in an influential way.

Truly to the title, the author touched upon the good, the bad and the ridiculous side of the personalities. However I got a recent perspective to the concept from an Australian YouTuber who makes videos on Cricket matches inviting viewers to nominate performances and incidents from matches to suit these three concepts. It got me thinking as to whether not these concepts could be applicable to every phenomenon around us including a virus and the time frame covered by it like a Year. I think everything including Corona Virus has got to be one of those three things from good, bad and ridiculous. Or may be all three at the same time which let us apply on the year passing by.

THE BAD
The Bad from the year is easiest to pick out as everyone has a compilation of it already. Personal misery and misfortune of practically everyone cancelling out one another’s, let us list the more glaring public ones. The most visible of all has been the ill fated migrant labourers saga on which I was perhaps the first to write a blog from the confines of my quarantine. That was quickly followed by the widespread plight of the poors during the draconian lockdown due to loss of livelihood and consequentially lives. Then came the rise in the intensity of the infection spread leading to scramble for hospital beds, medicines, ventilators and all the logistical problems associated with it. The dread of the increasing numbers of deaths and the rocketing of the infection affected numbers brought rampant geographical banishment, containment of human interactions, rigorous confinement of the elderly and the desperation to see one another in family set up gave rise to grave mental health issues for every generation. Then of course the crucial issues of education, training, employment and lifestyle changes of the younger generation are yet to be sorted out. The stench of covid related corruption all around stunned citizens to  existential desperation. The list off what is Bad can be very long and very personal, but it is the most easily compilable among the three concepts.

THE GOOD
What is good about the crisis is hugely ironic and would be rather subjective. Then there would be things that would be good at a private level while  something else yet would be good at a wider collective level. The good at individual level can be the discovery of faith, spirituality, value of health and nutrition, empathy for fellow beings, discipline, solitude, need to connect with fellow beings starting with the family, value of reading and other private hobbies, frugality, a general sense of humility among others. One can keep adding according to personal situations and preferences.

The good at collective level starts with a meaningful sense of community, rediscovery of a community effort to fight adversity in the sense of Camus’ Plague, the realisation of environmental value and the essence of living in better harmony with nature as a global realisation. For me, however, the good at a global level is a painful sense of realisation by the more developed world of its avoidable arrogance and perennial patronising of the poorer cousins’ relative virtues. The Virus has been a great leveller, especially for the rich and the powerful. In many ways the Virus has shown the rich and the developed their place in the scheme of the universe. It has struck deeply at the condensation and sense of entitlement of the rich to preach the poor in a twisted sense of Kiplingesque rich man’s burden! At the end of each day the Virus drills hard into their ears that the rich are actually very poor at withstanding the fury of the pandemic and at the end of the day the poors have a better chance of survival than they ever thought. The beginning of the crisis saw the rich patronise the poor with their apprehension of the latter’s chances. The doomsdayer’s predictions of corpses piling up in Africa and Asia came terribly unstuck as events turned on its head. It was actually the other way round with the high per capita people falling by the wayside in proportion to their infrastructure and income level. But higher age and lower immunity combined with a life addicted to luxury proved no match to the Virus.

THE RIDICULOUS
The pandemic has been more of a man made than natural disaster. From it’s suspicious origin in China to that country’s criminal handling of information and the manipulation of supply chains to combat the pandemic, it’s replete with episodes clearly ridiculous. In our own country, it is no less subjective to list what have been ridiculous. The abrupt decision for most draconian lockdown to the periodic rituals of banging of Bartans to lighting of Diyas, we have our own theatre of the absurd. Then the absurdities of the lengthy tranches of so called pandemic related incentives where most measures were aimed at bolstering the supply side without allocating money into the hands of the people to balance it on the demand side are among our most prominent ‘ridiculous’. However, I shall offer my personal list of ridiculous mostly concerning our own people and institutions and their ways of interfacing with the virus in public domain.

First, our compatriots settled abroad, people of Indian origin(PIO), who have been far more condescending than actual westerners. To begin with we were lectured by our own guys on how backward and ill equipped we are in our infrastructure to combat the pandemic which was basically no rocket science as most of us here knew our weaknesses. In stead of being told as to how to go about things we were given the statistical nightmare of how many of us would die and how our streets would be choked with corpses. Our liberal media drunk this water along with the glass and we were given a doomsday vision which might have actually helped our Establishment to use the scare to force the unplanned lockdown into our throats. In stead of pushing Modi down it strengthened his position in reality!

Second, our Media which first created the scare spurring the migrant labourers panic and then making a feast out of the visuals of their misery for months. The statistical conundrum presented by the media created all kinds of fear and confusion in the minds of the people leading to a countrywide chaos. The institutions of governance hardly covered themselves in glory with each one of them dishing out their respective ‘ridiculous’. Each of our three primary institution went about doing work other than its own. To list of their ridiculous actions would be long to put in black and white.

Third, it’s about our celebrities and the total eclipse of their presence in these crisis times. In fact, they are the people who were among the most scared, almost to the point of utter cowardice. The show biz celebrities, the sports celebrities, the political celebrities and the media nurtured intellectual celebrities were the ones who have been most afraid, the kind of page four celebrities migrated to Zoom. Getting the excellent excuse to pontificate from their home during the lockdown, they revelled in their daily lucid nonsense not doing a thing on the ground for the deprived and the hopeless. The acts of a handful who were kind of lesser or non celebrities put the cowardice of these pontificating lot in sharp contrast with their selfish and pompous sense of entitlements coming out to the open. None of these bleeding hearts page four messiahs took out a rupee from their pocket for the masses who have been foolish enough to put the lot on a pedestal. To its great credit the pandemic, I must say, succeeded in putting these fake celebrities in their places and not least due to the disappearing of news papers along with its page four from public domain. If the pandemic is loveable for any single reason it must be for its singular act of putting the lid firmly on this celebrity culture which is ridiculous in my book at all times. To end a pompous absurdity you need the year of the absurd!