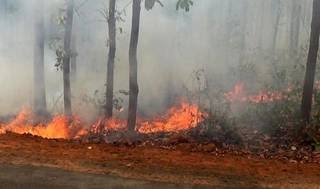 Bhubaneswar: As forest fire is spreading from one areas to another in the State, the Odisha government has constituted a high power task force to control the wild fire.

Representative of DG, ICFRE, Derhadun, and head of forest & ecology NRSC,Hyderabad, are also members of the task force.

Odisha is facing one of the worst forest fire incidents has engulfed part of Similipal forest known for its biodiversity and tiger sactuary. The Sunbeds sanctuary also faces the wrath of wildfire.